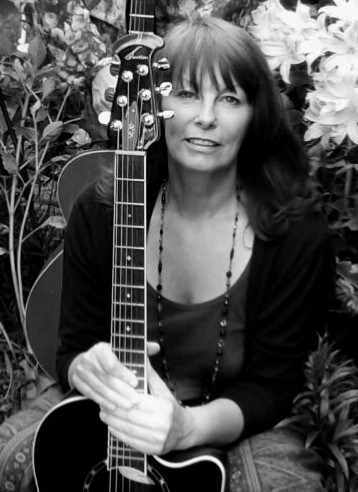 Gill started her musical appreciation on a tiny four octave Challen piano. Mrs Parkes, her music teacher was a lover of Chopin, when feeling generous she would allow a certain amount of ragtime and ‘modern’ music into Gill’s repertoire. It wasn’t long before Gill outgrew the Challen and a Richard Lipp upright grand was purchased from the local sale room. From nine years of age to twelve, Gill studied under this very accomplished pianist. Music continued at school with choir and school performances of Oliver Twist and various Christmas concert programmes.

After a few short years away from formal music lessons, Gill picked up the guitar and started writing songs, only taking it seriously in her thirties. From this point song writing began in earnest, and became a place of honest self-expression.

In 2012 she started recording and produced her first CD, “Colour Outside the Lines”. She started playing local folk clubs and in 2012 Gill met accomplished musician Kevin Watson and they formed the duo “Tree Top Flyers”. Kevin’s empathetic and skilled guitar playing complimented Gill’s voice and led them to record several original works.

In 2016 she met local musician Simon Burgess, they formed the duo “Burgess and Allen” and in 2017 toured Europe together. Burgess introduced Allen to the folk scene, both in New Zealand and Europe and Gill was inspired by Americana, bluegrass and country genres.

In late 2016 Gill met Kate Ward at a local house concert, the two instantly hit it off. They made plans to meet and trial their voices together – the duo formed “Wandrella” and have developed a strong relationship through music and performance.

Gill is currently working on her second album “Crystal in the Breeze” and is looking to incorporate both guitar and piano in an acoustic based compilation album. Gill’s first album “Colour Outside the Lines” can be found on Soundcloud

Such a fun day filming the video on the beautiful Kapiti Coast in 2013. Thanks to Rob Walker for filming and post production work – an fantastic job! Big hugs to my brother Russell Allen for believing in me.

‘Picture This’ is the first recorded song from my new album – Crystal in the Breeze. Vocals & backing guitar – Gill Allen. Acoustic lead guitar and bass – Kevin Watson. Keyboard & piano – David Trail. The album was mixed by Rob Walker. Much thanks to all those involved in the birth of a new album – exciting! Picture This – Gill Allen – Soundcloud